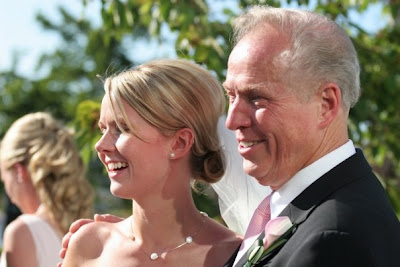 Today is Father's Day. I am one of the lucky ones. I absolutely adore my dad (not to mention my husband, father-in-law and grandpas), and I think he likes me too.

This is the speech he gave at our wedding. I think it will give you insight into the man who raised me and whom I'm proud to call my dad. Like I said, I am so lucky.

As you hold your newly born daughters for the first time, the last thing you think of are sons-in-law. And as of today I have 3 sons in law.

Just the other day Joan said something that I thought compared me unfavourably to my sons-in-law. So I said, other than being

What do they have that I ain’t got?

She said hair and good grammar.

I should mention that all 3 of the sons-in-laws come from boys-only families. Collectively 11 boys, zero girls. None of them have ever lived with a sister.

So I was thinking that I should conduct a seminar on living with a Hendrickson girl. It’s probably too late for Matt, but I think that Tyler might be interested and Adam definitely needs it. There is so much they don’t know.

For instance, they probably don’t know that women don’t ask questions. Questions are only statements in disguise.

If you think the words – “are you actually going to wear that shirt?” are a question, then you really need to take my seminar.

But today is about Sheri and Adam.

We first met Adam at Pilgrim Pines Camp in New Hampshire a few years ago when we went to visit Sheri who was working there for the summer. Sheri had told us about Adam and wanted us to meet him. When we got there and were about to meet Adam, Sheri told me to act mean because he was scared of me. I tried, but he wasn’t.

But then why would anyone who is

With hair and good grammar be scared of anyone.

One day at camp I was walking down the road through camp and I saw Sheri and a couple of her friends approaching me. As they got closer Sheri said something to her friends and although I couldn’t hear her I thought she said, “watch this.” So I was ready.

As we reached each other we didn’t stop and not a word was spoken, but Sheri just stuck out her hand and I pulled mine out of my pocket and put $20 in her hand. As they walked away I could hear one of her friends say,

I didn’t hear her answer, but I suspect it was, I can make him do anything.

Sports have always been an integral part of Sheri’s growing up.

We had family ski passes for many years and we would also usually spend a week at Panorama Resort in BC.

This started when Sheri was about 6 years old, and her first venture on skies was when we were at Panorama. The first day I spent with her on the bunny hill trying to get her to let go of me. She was afraid of falling and leached onto my leg. Finally I discovered that if I skied backwards in front of her she felt comfortable enough to ski on her own. But each day she grew more confident and about the third or fourth day we would take the chair to the top and ski down together. Ability and confidence grew quickly.

On our last day there that week we had taken a warm up run together and were about to get back on the chair when she suddenly darted forward and jumped on the chair ahead of the one we were waiting for. As her chair left she turned around and yelled to me,

“I’ll wait for you at the bottom.” And that’s pretty well the way it has been ever since.

When she was in high school she was very active in Young Life. Among other activities they ran a ball hockey tournament each year. Sheri told me she wanted to play in it so I took it upon myself to teach her some of the finer points of the game. Joan and I were watching her first game when the opposing player with the puck made a move on Sheri and tried to get by her by going between her and the boards. Sheri waited until the last second and then stepped up and just hammered her into the boards. I was thinking what a sweet hit, when the referee blew his whistle and gave Sheri a 2 minute penalty for roughing. I found out later that it was the first time in the history of the girls’ non-contact ball hockey tournament that someone was given a penalty for roughing.

And her father was so proud.

When Sheri was in high school, she attended a school some distance from our home because it was the designated school for the bilingual students. This necessitated taking public transportation each day. One day I questioned her as to why she was leaving for school so early. She told me she like to get there about a half hour early because then she could go into the cafeteria, get a cup of coffee, sit at a table and organize her materials for each of her classes for the day. She said that her day just goes better when she does that. I remember thinking, ‘she’s 16 years old and she’s demonstrating more maturity and smarts than most 60 years olds. Including me.

I was so impressed with this that I convinced her to skip a day of school and go skiing with me in the middle of the week. The beauty of going skiing in the middle of the week is that nobody is there. Never a line up and you can ski hard all day. When we got to the hill it was snowing heavily, which it continued to do all day. The rides up on the chair were miserable but each run down we had an inch of two of fresh powder. We stopped for lunch and went right back out. We skied until the chairs stopped.

As we headed for home I remember wondering if I had pushed her too hard because it was pretty uncomfortable on the chairs and we were very tired. Before I could ask, she turned to me and said, “THAT WAS THE BEST DAY EVER!”

Joan and I have had many great days with Sheri. Many great years.

And we know that Adam and Sheri will have many great years. And we couldn’t be happier for both of them. We obviously think that Sheri is special, but we also think that she has a special guy.

Special guys don’t just happen, they are made. And what makes them is a combination of many things. But by far the biggest thing is FAMILY.

So today I would like to commend Mark and Ann for the job they have done in raising Adam. I’m not sure if older brothers are always a positive influence but I do know that they factored into his upbringing. Your collective values are reflected in Adam.

We all want the best for our children and we love to see them make good choices, and that is why we are here today. They are both making good choices.

So thank you all for coming. The fact that so many of you have chosen to come to this little corner of Canada is an indication of the esteem that you hold for our young people.

We are very proud of them, and somewhat proud of ourselves.

Thank you again for coming. 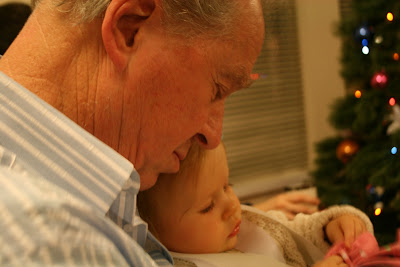 
Adam has all but finished his residency. He has hung up his white coat.

I must have blinked.

He's spending this month in training for his upcoming Chief Resident duties, and is formally done with his three year residency in internal medicine.

It was three years ago that we made the monumental (to us) move from Chicago to Seattle. We had finished our degrees, celebrated in Europe and left behind everything we knew and loved. It was time.

Our first year in Seattle was marked by loneliness, change, excitement, new jobs and a big health scare from our cat, Jack (which was traumatic at the time). Last year in Boise we dealt with loneliness, change, pregnancy, adjusting to parenthood, and the intense trauma of my mom's cancer. And now, somehow, it's been almost a whole year that we have been back in Seattle. This time there has been slightly less newness, less loneliness, less change. We came full circle but have landed in a completely different place.

I couldn't tell you just how many hours Adam has worked in the last three years, or how much blood, sweat and tears he has literally shed along the way, but I can tell you he has grown tremendously as a doctor. The wisdom, experience and confidence he has gained is absolutely evident. It has been so much fun to watch. Residency has been good to him, and good for him.

It has been a hard three years.

It has been a great three years.

It has been a trying three years.

Almost more than anything it has been a short three years.


(I started to cry while writing this post - so make of that what you will).
Posted by Sheri at 3:40 PM No comments: