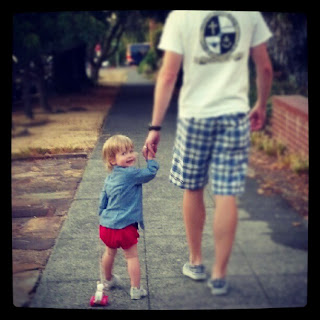 I saw Adam and Anna off to Chicago and watched as my heart got on the plane with them. I sat staring through blurry tears as the plane took off and prayed that my love would be enough to keep it in the sky, to return them safely to me. They pulled away, my whole world on that plane, slipping further from my sight, my grasp, my control by the second. It would be four days until I saw her again, and all I could think was that I was the one who had made this choice.

It was absolutely what I needed, and it was a win-win-win situation for the three of us. For Adam it was golfing in Chicago, for Anna time with her Grammy and Grampy, and for me -oh for me - a glorious child-free California weekend with my best friend. I bought a plane ticket to the opposite end of the country with equal parts giddiness and dread, knowing how hard it would be to walk away, yet knowing how much good it would do me. I welcomed the thought of days where I would be just me, the parts of me that I haven't been in so long. I longed to be just Sheri and not mama-Sheri. I chose independence over her. I made that choice.

And the weight of that choice hit me like a ton of bricks when I realized I would miss four days of this, and four nights would pass where I wouldn't kiss her goodnight  and remind her that I love her more than anyone has ever loved anything ever before. What if she forgot? What was I thinking?

God forbid... what if something terrible actually did happen... and I wasn't there, all because I chose myself.

The burden of choice was too much.

So I sat there and cried.

Then I got up, bought a latte and read my newspaper.

And got on that plane... gloriously alone.
Posted by Sheri at 12:07 PM No comments: