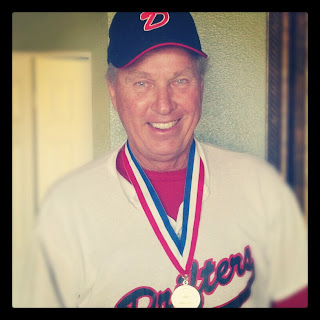 all about her dada

We did a little keepsake questionnaire for Adam for Father's Day. I thought Anna's answers were too cute not to share.

My dada's name is 'Dada'
He is 'big' feet tall
He weighs '6' pounds
He is '2' years old
His hair color is 'black'
His eyes are 'blue'
His favorite TV show is 'I don't know'
He likes to 'work'
His favorite food is 'cheerios'
His favorite drink is 'beer'
For fun he likes to go to the 'zoo with us'
I love it when my Dada 'bike'
My favorite thing about Dada is 'ride bike'
He makes me laugh when he 'gets me'
I love Dada 'cause I love Dada sooooo much!'

We'll get to church, you know, on time. And we will have been on the email list about the kinderchoir and know that it actually exists. We won't be told as we walk in the door that Anna is supposed to be singing... now.

And she'll do it. Our girl who spends most of her day singing will join her friends and teachers up front like she does almost every Sunday and sing with them. And my heart will burst with pride and joy just like the rest of the parents there. She won't scream, 'daddy!' and refuse to get off his lap, or at least he will sit up there with her and she will make it in the pictures like some of the shy-er children. This end of the year celebration will be joyful and meaningful and it will make me cry (in a non-frustrated and heartbroken way) and it will redeem all the Sunday's and sunday school's she had to miss this winter. These are the moments parents live for. What a milestone. I can't wait.

We will also get to the Sunday School picnic on time and we won't have to wake her up from a much needed nap. There will be food she can eat and we will play all the games together. She will be her most cheerful, charming and adventurous self. These are the events that parents live for. It will be even more fun than last year. I can't wait.

And finally, when we get her to bed after a full and fulfilling day, she will go down easily and sleep soundly. She won't take over an hour to fall asleep. She won't make us get baby, or take baby back out of her room a dozen times. We won't close the door the wrong way, and if we do, she'll shrug it off, like a non-crazy person would. She definitely won't wake up and scream inconsolably from 1-2:30 a.m. requiring both parents to perform a miracle to get her back to sleep. She won't hit, throw or scream relentlessly. She won't even dream of it.

I can't wait. Yesterday is going to be amazing.

(full disclosure: she actually wasn't a total mess at the picnic. She was a little cranky and sleep deprived, but she gave it her best shot, all things considered).
Posted by Sheri at 3:12 PM No comments: