I wrote this last week but haven't posted it  since all my energy has been spent either crying, screaming at Anna or trying not to. Don't misinterpret my parenting life as a perpetual state of bliss. I guess it's one of those complicated and paradoxical things about life: the hardest years are the best years.

This baby is coming, and soon. This baby we have long sought after, longed for and impatiently prayed for is going to make its appearance. Reality is setting in. My annoyance with this pregnancy is giving way to excitement of holding a real live baby in my arms.  Soon we will welcome a very real person, a very real human into our family. It's a wondrous gift that I can't quite wrap my mind around.

But I'm scared. I'm not just scared of labour and delivery (which somehow seems even more daunting the second time around). I'm not just nervous about dealing with two kids - a screaming newborn on top of an emotionally manipulative and screaming three year old. I'm not just worried about how Anna will respond to the new addition. I'm scared of how it will change our family - this little world we have built together.

The bond between the three of us is indescribably precious, and strong. We've had three years together, just me and Adam and Anna. We're in it together, doing our best, being a family and forging our path - just the three of us.

She's our little girl, our big kid, our baby, our everything and in turn we are her entire world. We take care of her, and she takes care of us. We are intimately bonded, wrapped up in this life we share.

There is something so precious about this uncomplicated time we have shared without competition, crazy schedules or  many distractions. It won't be the same, ever again. We're adding a newborn and losing even more sleep. We will have two kids to juggle - different needs, different wants, different personalities, different people. And Anna is getting older and more scheduled. Our leisurely days will give way to carpools and homework and soccer games. But we want more kids, and Anna desperately needs a sibling. It will be good for all of us to broaden and grow. It can be crazy and frustrating and sometimes stagnant in this insulated world of ours.

But it's familiar and wonderful and safe and oh so magical, this life we have built. It's luxurious and indulgent and I'm loathe to give it up. As excited as I am to relive the baby and toddler years, to grow our family, to enter a new stage, it's not without a sense of loss. We won't ever have these days and years back - the sweetest ones of my life.

My grandma once told me that love doesn't divide, it multiplies, and I'm holding onto this promise with great anticipation. We are so blessed I simply can't imagine multiplying our joy.

So I'm holding onto the last few days and weeks of our lives as is and cherishing them as the priceless gift they are. I'm relishing each moment and thanking God for the gift of these last years. The time where Dada and Mama and Anna made three.
Posted by Sheri at 3:47 PM 1 comment: 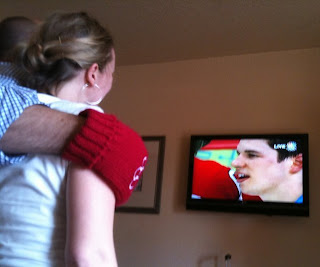 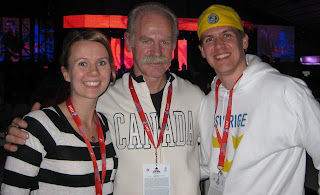